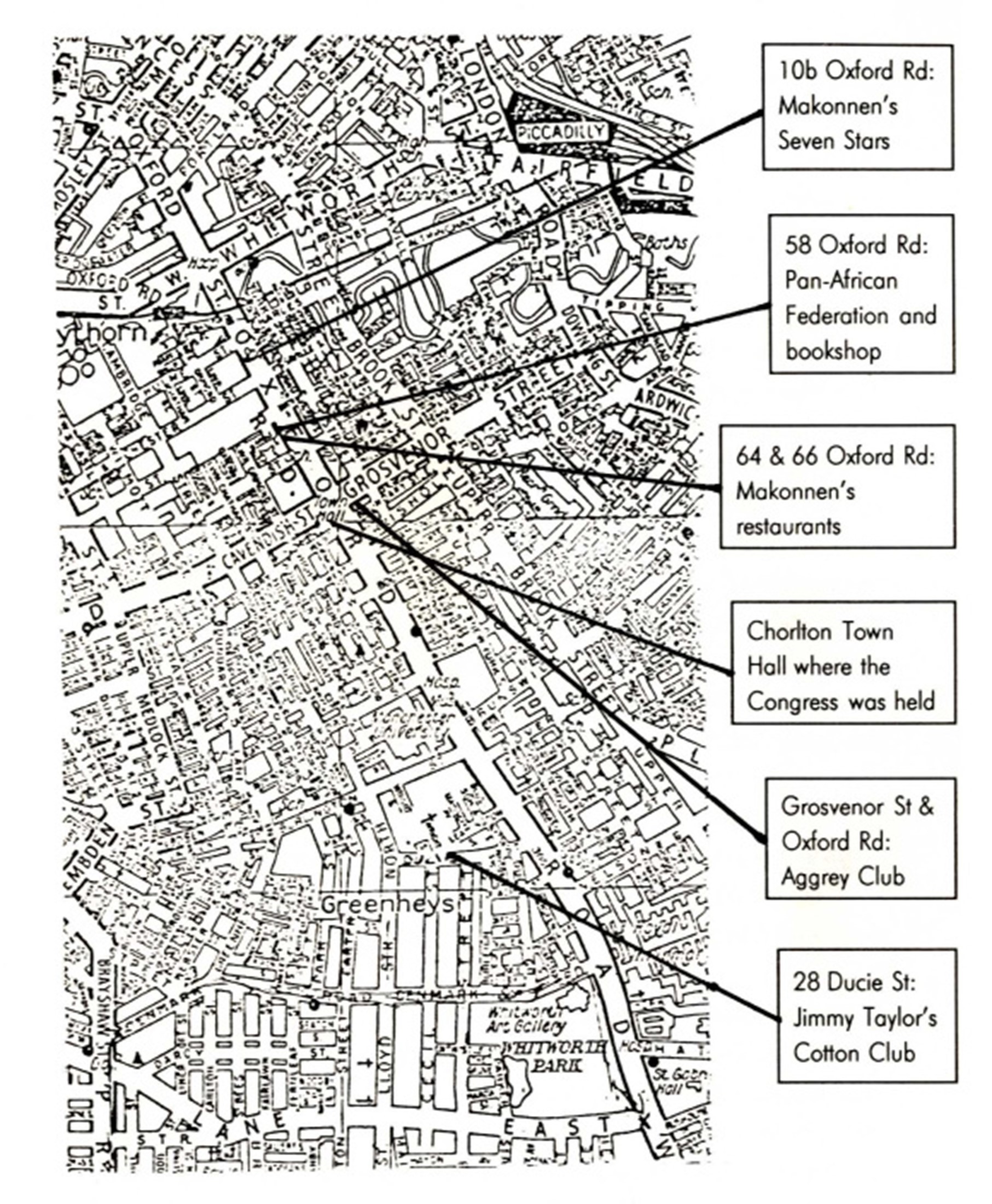 This is another refreshed blog, originally published in 2019. It’s written by Natalie Ward, who was an intern at the AIU Centre. As well as exploring the friendship between Ras T Makonnen and Alfred Gaisie, Natalie underlines the importance of the various cafes, restaurants and other safe Black-run spaces that existed at the time of the 1945 Congress.

How Friendship and Business Helped Build the Pan African Congress

Mr Alfred Gaisie’s 1995 Interview with Robin Grinter was my introduction into the Pan-African Congress archive collection.

The archive is held within the Ahmed Iqbal Ullah Race Relations Resource Centre. I was immediately struck by how much importance he placed on his friendship with Dr T. Ras Makonnen.

They took care of each other, they built businesses together and together they put on the 5th Pan-African Congress in 1945.  Mr Gaisie first came to Manchester with his father, who worked for Unilever, but sadly after his death a young Alfred Gaisie was left to fend for himself.

After working a few odd jobs and receiving multiple accreditations in bookkeeping and commerce, he was finally awarded a scholarship at Manchester University. Working and studying at the same time was not uncommon, even in those times, but it was only after meeting Dr Makonnen that Mr Gaisie found stable housing and a community to call his own.

The simple connection that brought these two together was their shared heritage. Out of this friendship came business and community ventures from the ground up.

The first of these was a restaurant, called the Seven Stars, which sold America, British and African food. The Seven Stars quickly grew in fame, hosting the likes of Nat King Cole, his daughter Natalie, Joe Louis, and many leaders of African Independence movements.

But not only did they feed the Black celebrities of the day; they fed and employed the community as well. Students, industry men, families, activists, and women with small businesses of all backgrounds and ethnicities could be found in the Seven Stars on any given day.

Beyond the Congress: Hairdressing and Nights Out

Through Dr Makonnen’s businesses, he and Mr Gaisie were able to build up distinct community spaces that brought people of African, Asian and Caribbean descent together.

The Foreign Club, which Mr Gaisie describes in the full-length interview, available on request, was one of these spaces. It attracted not only the BAME community in Manchester but African American veterans from both World Wars. It was a place where people could get together to share their troubles, celebrate their accomplishments, discuss the politics of the day and most importantly have fun.

Stories told by Mr Gaisie are not the only ones in our Archive that emphasize how important having a close-knit Black community in Manchester was for recent migrants. Vian Louise Christian, speaks emotionally about how it felt to finally meet another black woman after moving to Manchester.

Once again their shared experience of heritage and womanhood brought two strangers together in great friendship.  Mrs Vian Christian, like Dr Makonnen and Mr Gaisie, then made it a part of their lives to build spaces for community and friendships to grow. Having a place for black women and their children to feel safe and openly celebrate their culture was indispensable. Far away from their previous home, having Mrs Vian Christian’s house was a way for black women to slowly build friendships, trust and a true sense of community in Manchester.

The stories we’ve heard today were momentarily lost but as we at the Archives look through our collections,  forgotten histories like Mrs Vian Christian’s and Mr. Gaisie’s are rediscovered.

It was the revenue from Mr Makonnen’s businesses that funded the Congress and brought many of the attendees to Manchester.  Mr Gaisie, speaking of the legacy he and his comrades left in Manchester, said it best in his final statements of his interview:

It is our turn to learn from our histories and understand how powerful our communities of friendship can be. The fact of the matter is, there are so many examples like these.

Today, there are people in your communities who are bringing people together and have been for years! The businesses they run, lunches they organised and church groups they attend are why ethnic and minority communities thrive in cities like Manchester.

We must celebrate the progress that this city has made but we still have some work to do. What I’ve learned from this collection is that it is only with care, compassion and community engagement that great change can occur.

Previous Post Researching Ras T. Makonnen and Pan-Africanism in Manchester at the Ahmed Iqbal Ullah RACE Centre
Next Post Why was the 1945 Pan-African Congress held in Manchester?

The New York Teacher’s Strike and the United Bronx Parents

<strong>Shoot to Kill: The Chicago Police Department and Black Power</strong>