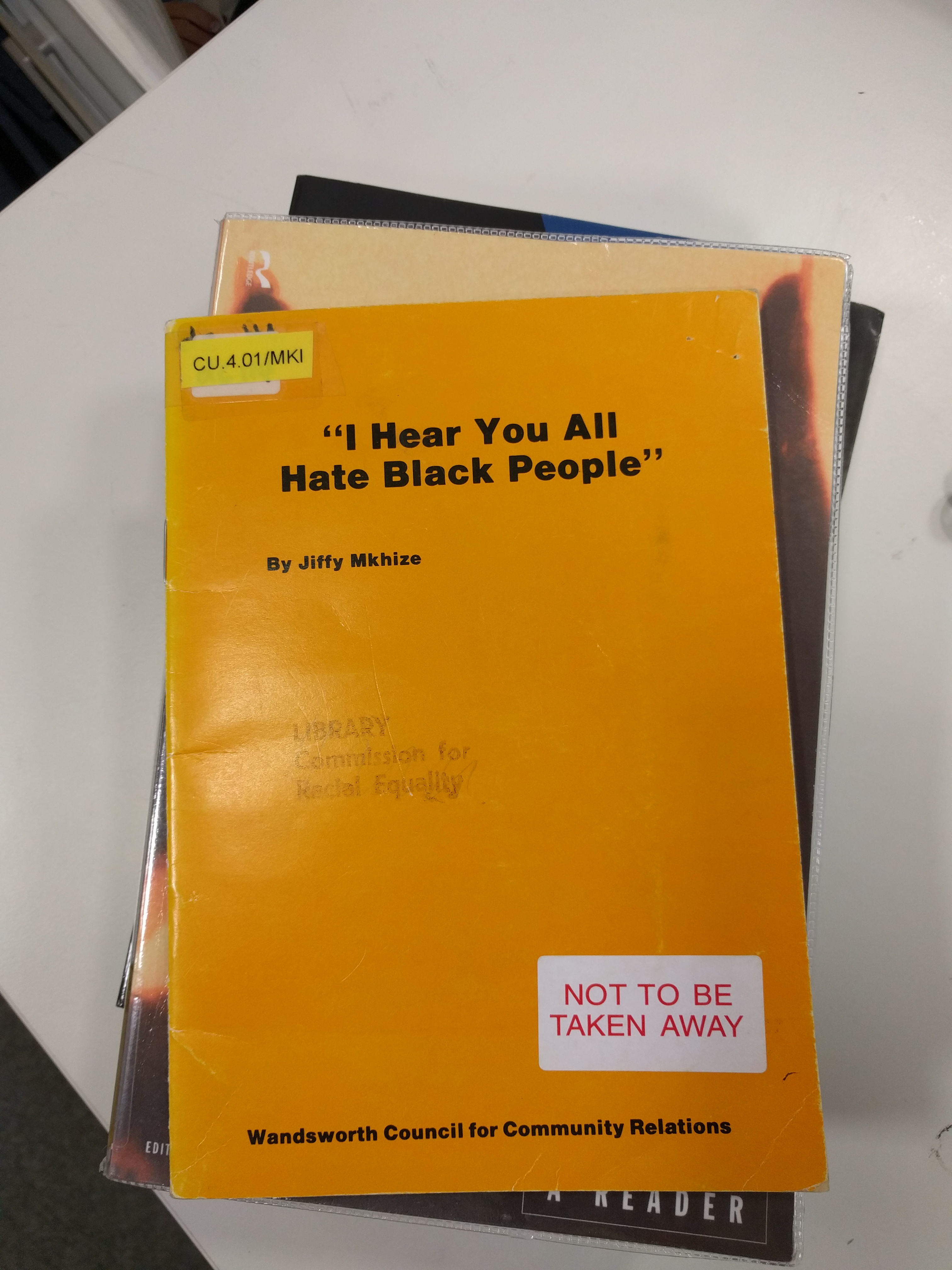 AIU Library staff are currently going through the library stock to see how we might better update what we have on the shelves. As well as books, the stock also includes reports and resources about race from the 1980s and 1990s. While a lot of the information is out of date, it provides an insight into how people were approaching race relations work in Britain at the time. This is one of the publications we have on the shelf, reviewed by Heena Patel.

“I hear you all hate black people” by Jiffy Mkhize (Wandsworth Council for Community Relations , January 1, 1981)

The murder of George Floyd in late spring of 2020 accelerated the sales of books like ‘White Fragility’ by Robin DiAngelo and buzzwords like ‘unconscious bias training’ and ‘white privilege’ were on a lot of people of people’s lips. A proliferation of books in a similar vein has followed, such as ‘Do Better’ by Rachel Ricketts and ‘What White People Can Do Next’ by Emma Dabiri, but what were white people thinking four decades ago?

This unassuming pamphlet examines the state of anti-black prejudice in Britain based on the author’s experiences as a community worker. It was written in 1981 by an Essex-born London-raised woman called Jiffy Mkhize, then 34 years old, working in race relations as part of the Community Relations Council for Wandsworth, South London.

It would be easy to lay all the blame for racial tensions at the feet of the far right, Mkhize argues. Instead, she calls for the government to step up and take responsibility. She highlights the inadequate accommodation they make for immigration, not just for the new arrivals, but for those already here; not just after people arrive in Britain, but before.

Mkhize goes on to deliver a blistering attack on “the way white professionals have tackled white racism to date.” This is garnered from her ten years of doing community work and is highly critical. She takes down each strategy, point by point, giving real examples of why the ‘colour blind approach’ and pretending problems don’t exist simply don’t work. “I’m sure they would be hard pressed to convince any black Liverpool natives of this ‘melting-pot’ theory,” she writes. “After all, there are third and fourth generation children of black migrants there and it certainly has not improved their job and social standing prospects – coffee-coloured or otherwise!”

She offers alternative approaches she uses when in the community, where the people she meets are often working-class whites.  Instead of shutting them down for racist language and attitudes, she listens to them vent their frustrations – often justifiably – about their living conditions before she tries to address their prejudices, which she does thoroughly.  Instead of trying to dispel myths about black people, she educates white people about how the Britain’s welfare and housing systems work, and often how they don’t. To help to help people understand the situation we are all in, she gives context to immigration from former British colonies and what life was like there. She brings up deep questions about how British society is organised in terms of welfare and social reproduction. These approaches seem incredibly radical now, over forty years later (unlike the attitudes of people claiming to be radicals in her area of work). What is striking to today’s reader is that the local council had funding for this kind of work then, something that seems unimaginable now.

Mkhize originally trained as a fine artist. Reading this essay, you get the impression that she educated herself thoroughly on a British Empire-inclusive social and political history to be able to do her job well. She didn’t look down on the people she supported as part of her work and didn’t write them off as lost causes. Instead she sought to understand them and to empower them with knowledge so that they redirected their anger from scapegoats to the people who were really responsible.

A quick internet search sadly reveals nothing about Jiffy Mkhize except that she wrote this booklet. A black-and-white photo of her appears in the publication and a short biography mentions that she went on to work in nurseries and at Inner London Education Authority family workshop. I would love to know what else she did after that and, if she is still alive, what her thoughts are about the state of race relations today.

There are two copies of booklet in our culture section, 4.01/MKI.  One copy is reference only and the other is available to loan.

‘The language may be different but the feelings we share as women survivors are mutual.’ – Safety4Sisters Writing Group

Women’s Activism in Our Archives