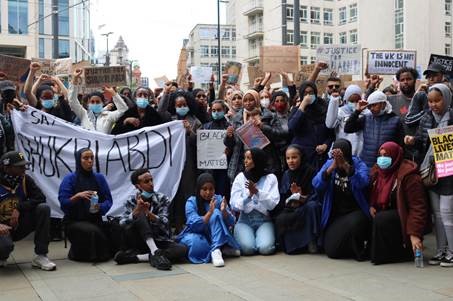 Earlier this year we shared a post about the tragic death of Shukri Abdi, and its similarities with the case of Ahmed Iqbal Ullah. Shortly after that post was written, protests were held around the country, and in the USA and Canada. Here, Idiris Sheikhnur shares his experience of the protest in Manchester. (Note: this piece was written before the recent coroner’s verdict.)

This blog discusses a community gathering and organising of a peaceful protest around a local tragedy on 27 June, the one year anniversary of the death of Shukri Abdi, a protest which took place on the doorstep of the Ahmed Iqbal Ullah centre in St. Peters Square.

The year 2020 will live in infamy as the swirling effects of the COVID-19 pandemic have been both transformative and destructive. Fundamental aspects of how we live and interact can no longer be taken for granted as lockdown in March brought a grinding halt to the engine of capitalism. The virus infiltrated pathways of capital and international trade like never before as a global reset left us stranded in our cities and homes giving nature a chance to breathe with silence in the skies. And yet this collective moment in time brought a painful reckoning of the systemic problems of racism and class divide that could no longer be ignored. Across the pond, as African Americans were killed in broad daylight or sleeping in their homes, a sharp focus on the disproportionate impact of COVID-19 on Black, Asian and Ethnic minority communities here in the UK was brought to the fore. The devastating ripples of institutional failure to protect those on the margins of society ignited anger and action as people took their voices to the streets both local and international in this summer of resistance.

The case of 12-year-old Somali refugee Shukri Abdi who drowned in a river in Greater Manchester last summer provides a symbol of state neglect. From the lack of proper safeguarding principles at the school to accounts of bullying, the failure of the police to initially open an investigation or the fact that asylum seekers are continuously housed in the poorest parts of the UK. Combining this with this country’s attitudes to immigration and islamophobia, the problems faced by Shukri’s family start to make a lot more sense. And so, on the same steps of the Race Relations Centre named after Ahmed Iqbal Ullah, a Burnage High School student murdered in 1986, a painful symmetry of similar circumstances in 2020 saw a diverse cross-section of the Manchester community protest their outrage at this injustice. Organised by a small group of young Somalis (including myself) with the support of the wider elder Somali community including Shukri’s mother ZamZam Ture and the wider organising movement of Black Lives Matter. This intersection of interests marked a day of protest across the Somali diaspora, a collective energy and solidarity channelled through social media that saw similar protests nationally in London, Cardiff, Sheffield to Los Angeles and Toronto. In Somali when we see injustice we say “dhiiga kuma dhaqaqo?” which translates to “does your blood not move?”. Our hearts moved for sister Shukri Abdi.

And so on to the day of the protest and in typical Manchester fashion the heavens opened. The rainy city poured as the organisers set up their posters and banners along with stocks of masks and water bottles to be handed out under the protection of the library portico. Different parts of the press began to buzz around looking for sound bites. As the crowd began to form and take life the clouds parted for a break of sunshine. People began arriving with their own posters, groups of friends and generations of families began to chant, “Say her name!”. It was important to the organisers to have our conversations and message feel intimate and centre Black Muslim Womanhood. So often Somali women carry the needs of the community, working incredibly hard to sustain businesses and raise families with very little support and often excelling. This was the chance to let our mothers, our aunties, our younger sisters to let their voices be heard and articulate their frustrations and anxieties that are so often ignored by society. As we marched through Deansgate and Market Street people had to confront the visceral emotion we felt as a community. It was important to show out for Shukri, to stick together and scream her name and to continue fighting until we get her justice. When the state fails the onus will be on the people to remember the voiceless so that we can all do better, so no child has to suffer like this again.

‘The language may be different but the feelings we share as women survivors are mutual.’ – Safety4Sisters Writing Group

Women’s Activism in Our Archives